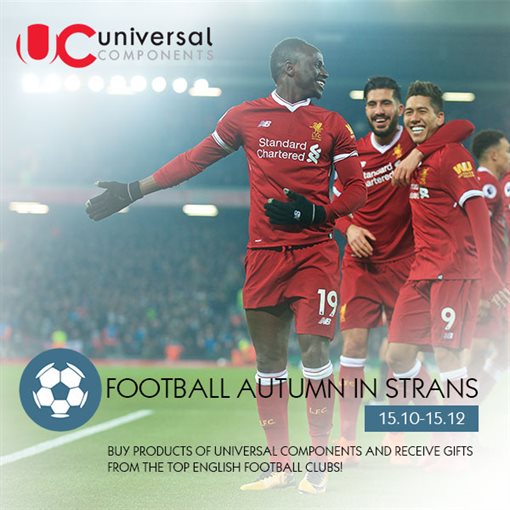 From October 15, a promotion for true football fans will launch in Strans shops.

The British company Universal Components is widely known in the world as a manufacturer of quality spare parts for freight vehicles. And now, by buying essential elements for cars, each client can take part in a unique promotion from Universal Components!Terms

The promotion will last from October 15 to December 15. Strans clients can automatically become a member of it by just buying Universal Components products. During this period, the amount of purchases will be accumulated, and upon expiration of the promotion, the total customer purchase rating will be deduced, according to which:

- the first three people in the rating will get the form of the top clubs of the English Premier League;
- the next 10 people will get the original balls of England football clubs.

Every client who joins the promotion and guesses the estimated amount of points that this season's champion will gain in England, will get an extra prize! It is enough to complete the questionnaire and indicate the probable amount of points during the purchase of spare parts from Universal Components! The winners will be awarded after the end of the season.

Also, 15 bonus prizes, among which – valuable club gifts, will be played in the final of the promotion among all customers who made a purchase of Universal products.

So, buy spare parts from Universal Components in any Strans store for your car and do not miss the matches of the English Premier League! Also, keep an eye on our news on the site and social networks, not to miss the advantages for yourself and your business!